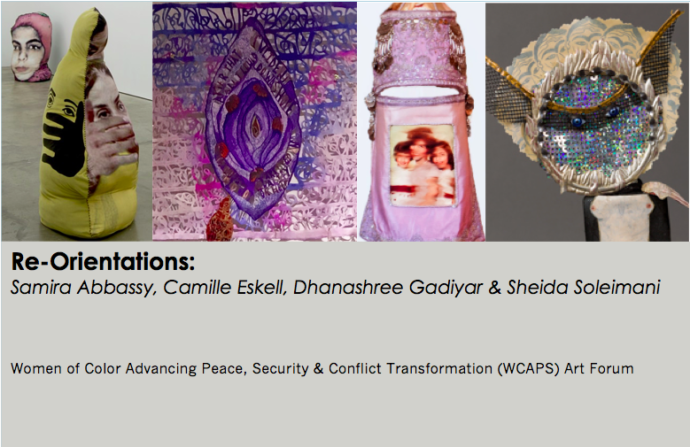 Re-Orientations features new sculptures, installation and mixed-media work by Samira
Abbassy, Camille Eskell, Dhanashree Gadiyar and Sheida Soleimani, women artists
living and working in the US with roots in India, Iran and Iraq.

Re-Orientations is a contemporary feminist response to Edward Said’s seminal text on
Postcolonialism,“Orientalism” which re-orients the world from a non-Eurocentric
perspective. Taking up the mantle where “Orientalism” left off, the artists in this
exhibition shed light on social structures and questions of identity through humanizing,
figurative approaches confronting existing religious and gender stereotypes and the
place of womens’ bodies in contemporary art.
The artworks represent the perspective of individual women artists across generations
and a range of faiths, incorporating Hindu, Jewish and Muslim perspectives. These
artists – who are first or second generation immigrants – frequently respond to issues that
reflect the decades of conflicts and human rights abuses, particularly as relates to
women’s rights, in these regions of the globe.

Women of Color Advancing Peace, Security and Conflict Transformation (WCAPS) is an
NGO founded by Ambassador Bonnie D.Jenkins to address the absence of significant or
sustained voices from women of color in discussions of global issues often affecting them
most. These vital issues include global health, food and water security, climate change,

peacekeeping, weapons of mass destruction nonproliferation, and the intersection of other
areas of international security. The WCAPS Art Forum seeks to create a safe space to
encourage new ways of understanding how issues of peace, security, and conflict affect
women of color globally and bring more people into the discussion of these important issues.

Co-Curated by Audra Lambert of Antecedent Projects and Anita Alvin Nilert of Art to
Zebras in partnership with alt_break.

With generous funding from the Lily Auchincloss Foundation.

The exhibition will be on view through November 8th:
Thursday-Saturday 12-7pm
Sunday-Wednesday 12-5pm (closed Monday)
by appointment
There will be a closing party on November 8th

Samira Abbassy was born in Iran, and lives and works in New York. A sculptor and painter, she
draws from the rich legacy of her own Persian heritage and a blend of religious iconography to
form compelling figurative works subtly reflecting political commentary.. Abbassy holds a degree
in Painting from Canterbury College of the Arts in the UK and is Co-Founder, Elizabeth
Foundation for the Arts artist studios. She has held fellowships from the Saltonstall foundation
and the Pollock-Krasner Foundation; her works are included in several public and private
collections, including the Metropolitan Museum of Art in New York, NY.

Camille Eskell is an Iraqi-Jewish-American mixed media and Installation artist and arts educator
with roots in India. Her family worked as couturiers and particularly in the milliner and
haberdashery trades, producing Fez caps and other head apparel, in Mumbai. Eskell references
this heritage and legacy in her mixed media sculptures by incorporating objects from her archive
and using textiles, potent symbols and images to comment on the expected role of women
affected by religious, cultural and social conventions. Eskell has been featured in exhibitions both
in the US and abroad. Her work is held in private and public collections alike and she holds a
Master of Fine Arts from Queens College/CUNY.

Dhanashree Gadiyar (Shenoy) is an Indian artist based in the United States whose work centers
around images pertaining to feminism and the domestic. She expresses her personal immigrant
experience through painting, drawing, embroidery and mixed media using bold colors. Gadiyar
holds an MFA from the City College of NY (CUNY) &amp; has been awarded fellowships from the
Laundromat Project And Bronx Museum.

Sheida Soleimani is a visual artist whose work melds sculpture, collage, film and photography to
create lush images that highlight her critical perspectives on historical and contemporary
sociopolitical events in Iran and the Middle East. Rooted within her family’s history as refugees
fleeing the Iranian Guard in the 1979 revolution, Sheida’s practice dissects political realities with
an emphasis on the role women can play as activists and agents of radical change against
Eurocentrism. Soleimani holds an MFA from the Cranbrook Academy of Art and is a professor of
studio art at Brandeis University, as well as 2019 visiting artist at Yale and Brown Universities.
She has exhibited extensively and is currently preparing for a 2020 solo exhibition at Harlan
Levey Projects, Brussels, BE.

Ambassador Bonnie D. Jenkins is the Founder and President of Women of Color Advancing
Peace, Security and Conflict Transformation (WCAPS) an organization that is dedicated to
creating a platform devoted to women of color that cultivates a strong voice and network for its members while encouraging dialogue and strategies for engaging in policy discussions on an
international scale. Ambassador Jenkins is a Nonresident Senior Fellow at the Brookings
Institution in Washington, DC. and an Adjunct Professor at the Georgetown University School of
Foreign Service. Jenkins was nominated by President Obama and confirmed by the U.S. Senate
in 2009 as Special Envoy and Coordinator for Threat Reduction Programs in the Bureau of
International Security and Nonproliferation, U.S. Department of State (DOS). She served in that
position until January 2017. Jenkins was the DOS lead for the 2010–2016 Nuclear Security
Summits and the U.S. Representative to the G7 Global Partnership Against the Spread of
Weapons and Materials of Mass Destruction. She provided leadership in the diplomatic efforts
promoting the Global Health Security Agenda (GHSA), the initiative to prevent, detect, and
respond to infectious disease.