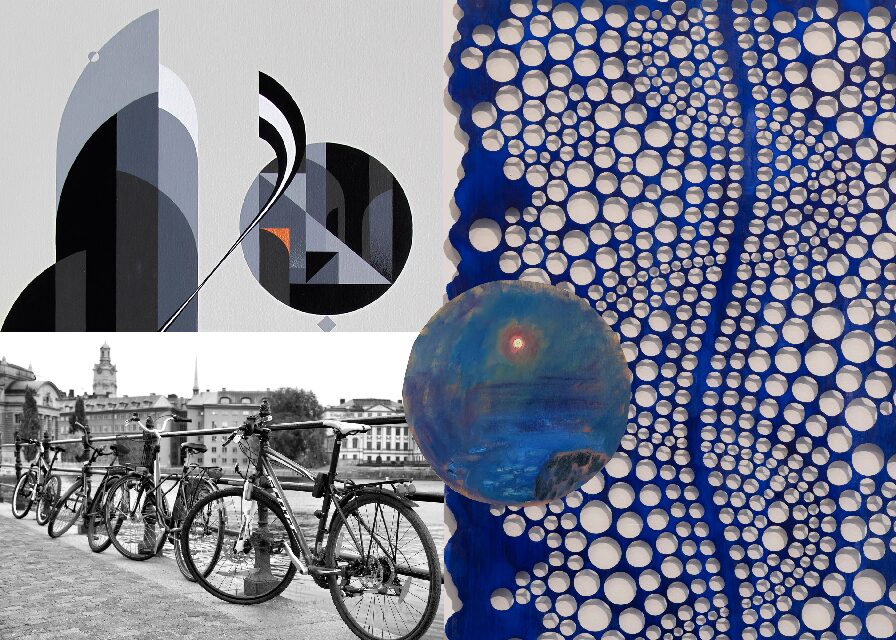 BRIAN D. BUMBY is an award-winning photographer born in Bay Ridge, Brooklyn to a Norwegian/Danish mother and Finnish/British father who grew up with numerous Scandinavian cultural traditions. Some of his favorite experiences include photographing his great-grandmother’s birthplace in Mandal, Norway; celebrating New Year’s Eve inTromsø, Norway and at the famed Noma in Copenhagen, Denmark; and sailing in the Swedish archipelago. The photographs on view from Denmark, Iceland, Norway and Sweden are available in a special American Scandinavian Society edition. Brian’s images have been featured by numerous international websites, blogs, and magazines including Conde Nast Traveler;  Travel + Leisure; National Geographic; Vogue ;  BBC Travel, The Telegraph, and The Financial Times. Brian is a graduate of Harvard University, where he studied English literature.www.bumbyfoto.com

EVA FAYE Is an acclaimed visual artist who grew up in Oslo, Norway. Her paintings on vellum have translucency and spatial depth, with light and shadows creating a sculptural presence through graphic cut out patterns.Faye references human structures and nature’s organic structures and rythms in repetitive patterns that are reminiscent of music. She describes the work as  “Equal parts memory, dream and observation”. She studied art both in Paris and in New York. She has a Bachelor of Fine Arts Degree from Parsons School of Design and a Master of Fine Arts Degree from Hunter College in New York. Her drawings and paintings have been exhibited widely both in Norway and in the U.S. Eva is the recipient of several grants from Norway and The New York Foundation For the Arts Fellowship. Her work can be found in both private and public collections, among them The National Museum of Art, Oslo, Norway, The Norwegian Council for the Arts, Parrish Art Museum, Water Mill, New York, and Montefiore Art Collection, New York. Eva is the recipient of the Cultural Grant for Norway as well as the inaugural Elfi von Kantzow Alvin Art Award. www.evafaye.com

ILSE SØRENSEN MURDOCKis an accomplished Danish-American artist –who paints outdoors exploring human relationships to nature, by assimilating experiences of light, terrain and weather, and relating them to the subjects of duration and time. Each painting is made in one go, and the pallet is mixed directly on the actual canvas or wood surface, eliminating paint waste. Remnants of pure pigment and thick gestural mixes are left exposed and function in the painting compositionally. Repurposed materials like found wood and personal refuse like her own shoes are built into surfaces, giving the paintings sculptural weight while touching on subjects of sustainability and fresh approaches to the rich tradition of plein air painting. Ilse earned a certificate in perceptual painting from the New York Studio School and studied philosophy and religious studies at New York University before earning her BFA from Parsons School of Design, 2000, and MFA from Rutgers University, Mason Gross School of the Arts, 2009. Murdock has been a resident of the Edward F. Albee Foundation, and Skowhegan School of Painting & Sculpture. She has exhibited widely. When not outdoors, Ilse produces the work in her Greenpoint, Brooklyn studio.www.ilsemurdock.com

TONY “RUBIN” SJÖMAN is a renowned Swedish-Finnish Manhattan-based mural and studio artist . He draws inspiration from his Scandinavian heritage for his complex abstract geometrical murals and studio works. Rubin wrote his first tag at age nine in Bergsjön, the gritty blue-collar housing project where he grew up. Ten years later, at age 19 he had become one of the most active graffiti writers in Sweden. Rubin has since become a staple of the art scene of New York City and beyond. His murals can be seen all over the world including in NYC, on churches in Brooklyn, high-end boutiques in Soho, luxury high-rises throughout Manhattan and on the 69th floor of WTC 4. Rubin’s studio work, including paintings and sculpture has been exhibited widely in Europe and the US. Rubin’s art has been featured in NBC News, New York Post, among other media outlets in the United States and he is also the subject of the art book “Rubin: New York / Scandinavia” www.rubin415.com–book signing at the reception-