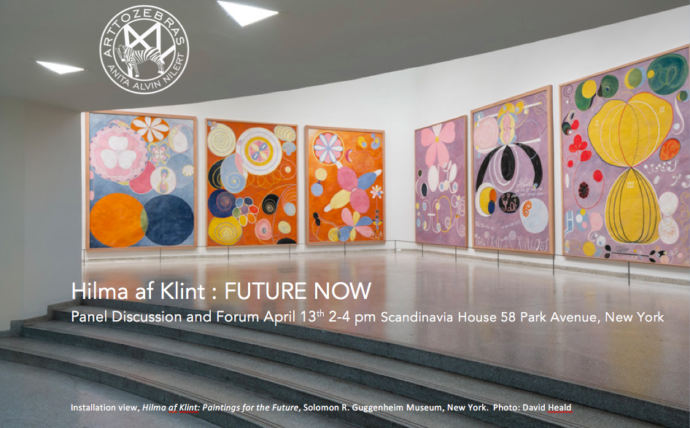 Coinciding with the closing weeks of the seminal exhibition Hilma af Klint: Paintings for the Future at the Guggenheim Museum in New York, please join us at Scandinavia House for a conversation about the work of one of art history’s foremost pioneers. Featuring panelists Ulrika af Klint, Christine Burgin, Michael Gomes, David Max Horowitz, Ann McCoy, and Eddie Stern, the panel Hilma af Klint: FUTURE NOW provides a forum to learn more about the symbolic language in this celebrated artist’s work, while examining both spiritual and esoteric references from a variety of perspectives. Hilma af Klint anticipated that her paintings would be understood in the future; is that future now?

Organized by Anita Alvin Nilert and Eva Lewenhaupt. Special thanks to the Consulate General of Sweden, New York.

Panelists include:
David Max Horowitz — Curatorial Assistant, Hilma af Klint “Paintings for the Future” at the Guggenheim Museum of Art
Christine Burgin — Gallerist, editor and publisher of Hilma af Klint “Notes and Methods”
Ann McCoy — Artist, curator and art critic; lecturer on Art History and Mythology at Yale University
Michael Gomes — Scholar of theosophy and esoteric movements; award-winning author of Dawning of the Theosophical Movement
Eddie Stern — Yoga teacher, founder of the Broome Street Ganesha Temple, and author of One Simple Thing, A New Look at the Science of Yoga and How It Can Transform Your Life
Ulrika af Klint — Chairman of Hilma af Klint Foundation

Christine Burgin is a renowned gallerist, and publisher of books and projects by artists and authors including Emily Dickinson, Allen Ruppersberg and Robert Walser. Burgin edited and published the book Hilma af Klint “Notes and Methods” which traces the origins of her powerful abstract work. Included are the first mediumistic drawings she created with The Five; Flowers, Mosses and Lichens, a spiritual explication of the plant world; and the Blue Notebooks in which af Klint catalogued her most important body of work, The Paintings for the Temple. In addition to translations of all notebooks reproduced, the book also includes Letters and Words Pertaining to Works by Hilma af Klint, an invaluable guide to the meaning behind the work compiled by Hilma af Klint herself.

Michael Gomes is one of the world’s most distinguished scholars of Theosophy. A historian and author, he is also director of the Emily Sellon Memorial Library in New York. He is also one of today’s most respected writers on esoteric movements, well known to both students of esoteric literature and to scholars of religion. His works include an abridged and annotated version of H.P. Blavatsky’s Secret Doctrine, Isis Unveiled and an edition of The Secret Doctrine Commentaries: The Unpublished 1889 Instructions which provided her theories on light and color. He was awarded the Herman Ausubel Memorial Prize for achievement in history by Columbia University after the publication of his Dawning of the Theosophical Movement. His research also looks at the development of the idea of an Eastern esotericism, of which Theosophists were large contributors, created not only for comparison but also as confirmation of the existence of a Western esotericism as well as for the chapter on Theosophy in The Cambridge Handbook of Western Mysticism and Esotericism, from Cambridge University Press.

David Max Horowitz is a curatorial assistant at the Solomon R. Guggenheim Museum, who assisted in organizing Hilma af Klint: Paintings for the Future and R. H. Quaytman + ×, Chapter 34. Previously he worked on the exhibition Agnes Martin (2015–16) as well as collection presentations of early modernism and the work of Constantin Brancusi. He holds a master’s degree in liberal arts from Johns Hopkins University and is currently pursuing a master’s in art history at Hunter College. His research focuses on the intersections of art and popular spirituality, viewed in sociohistorical context.

Ann McCoy is a New York-based sculptor and painter whose career began in 1972. She is a working artist, as well as a curator and art critic, who writes for the Brooklyn Rail. McCoy taught in the Art History Department at Barnard College from 1980 through 2000. Her Barnard class appeared in the documentary Keep the River on Your Right: A Modern Cannibal Tale.
She lectures on art history, the history of projection, and mythology in the graduate design section of the Yale School of Drama. She has written about artists working with projection including William Kentridge, Tony Oursler, Nalini Malani, and Krzysztof Wodiczko. Her work is included in the following collections: the Metropolitan Museum of Art, the Los Angeles County Museum of Art, the Hirshhorn Museum and Sculpture Garden, the Museum of Modern Art, the National Gallery of Australia, the Roy L. Neuberger Museum, the New Orleans Museum of Art, the San Francisco Museum of Modern Art, and the Whitney Museum of American Art, among others. McCoy is a winner of the Prix de Rome, the D.A.A.D. Kunstler Award, and American Award in the Arts. She worked with Prof. C.A. Meier, Carl Jung’s heir apparent for twenty-five years in Zurich and has a background in Jungian psychology and philosophy. She has studied alchemy since the early seventies in Zurich, and Rome at the Vatican Library.

Eddie Stern is a yoga instructor raised in New York City. He studied Astanga Yoga, chanting, philosophy and ritual under Sri K. Pattabhi Jois, from Mysore, from 1991-2009, and is the founder of the Broome Street Ganesha Temple in NYC; co-publishes Namarupa, Categories of Indian Thought, a Hindu art and philosophy magazine; and runs the Urban Yogis project that brings yoga and meditation to young adults and youth in disadvantaged and at-risk-to-violence communities in NYC, with his collaborator, Deepak Chopra. He has published several books on Pattabhi Jois and Astanga Yoga, including a translation of Pattabhi Jois’s 1960 treatise, Yoga Mala. He continues to study with Pattabhi Jois’s grandson and successor, R. Sharath Jois.