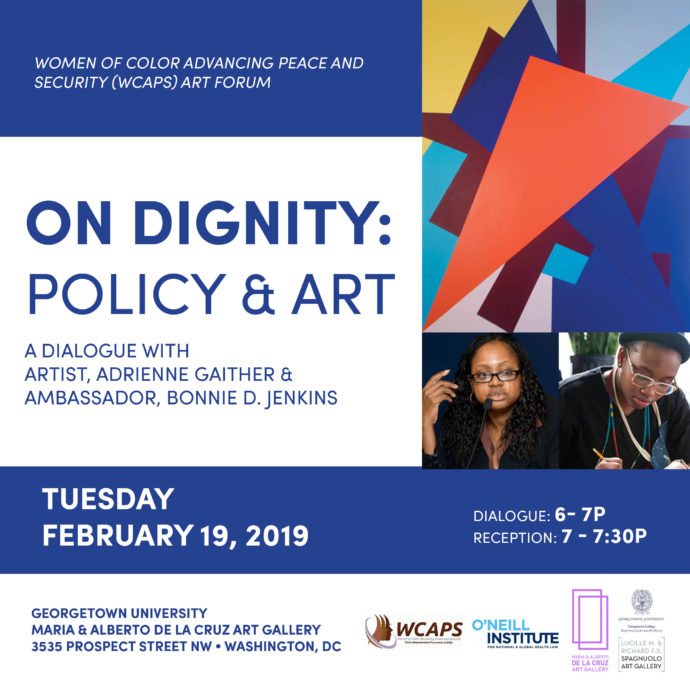 While the global community addresses such issues as health security, peacekeeping, and nonproliferation of weapons of mass destruction, the voices of women of color are largely excluded. Ambassador Bonnie D. Jenkins founded Women of Color Advancing Peace, Security and Conflict Transformation (WCAPS) in 2017 to advance leadership and professional development of women of color in international peace and security. The WCAPS Art Forum promotes engagement between women of color artists whose work encompass these themes, and a broader audience to inspire policy discussions on an international scale.

Adrienne Gaither’s series How I Got Over serves as the foundation for a dialogue with the artist and Ambassador Jenkins. Recounting recovery from traumatic events, reflecting their impact and visualizing what it means to become “whole” again, Gaither reclaims geometric abstraction for the purposes of healing. Though bright and colorful, the paintings have undertones of violence in an attempt to affirm the trauma and recovery process as valid and deserving of space and recognition as a survivor. Gaither attempts to normalize the conversation around trauma, recovery and the space it occupies in our human existence. The work provides a platform for a discussion of the intersections of race, gender and dignity in our society.

Adrienne Gaither is a visual artist based in Washington DC who uses color and geometric shape to redefine various ways one can communicate an idea. A mix of the conceptual and narrative, her paintings and murals use a range of influences including Abstraction and West African pattern-making, merging different times–past, present, and future in schematic visions. “Thematically, I attempt to highlight the struggle between what we believe we see, what we want to see, and what is actually there to be seen.” A graduate of the Howard University MFA program, Gaither has exhibited at The National African American Museum and Cultural Museum in Wilberforce, Ohio; and MoCADA (Museum of Contemporary African Diasporan Arts) in Brooklyn. Her work is permanently installed in the Washington DC West End Library and she is one of the artists selected for LIFEWTR

Ambassador Bonnie D. Jenkins is the Founder and President of “Women of Color Advancing Peace, Security and Conflict Transformation” (WCAPS) an organization that is dedicated to creating a platform devoted to women of color that cultivates a strong voice and network for its members while encouraging dialogue and strategies for engaging in policy discussions on an international scale. Ambassador Jenkins is a Nonresident Senior Fellow at the Brookings Institution in Washington, DC. Jenkins was nominated by President Obama and confirmed by the U.S. Senate in 2009 as Special Envoy and Coordinator for Threat Reduction Programs in the Bureau of International Security and Nonproliferation, U.S. Department of State (DOS). She served in that position until January 2017. Jenkins was the DOS lead for the 2010–2016 Nuclear Security Summits and the U.S. Representative to the G7 Global Partnership Against the Spread of Weapons and Materials of Mass Destruction. She led diplomatic efforts promoting the Global Health Security Agenda (GHSA), helped establish the GHSA NGO Consortium, and founded the GHSA Next Generation Network.

The WCAPS Art Forum seeks to create a safe space to encourage new ways of understanding how issues of peace, security, and conflict affect women of color globally and bring more people into the discussion of these important issues. WCAPS addresses the absence of significant or sustained voices from women of color in discussions of global issues often affecting them most, including global health, food, and water security, climate change, peacekeeping, weapons of mass destruction nonproliferation, and the intersection of other areas of international security.

Presented by Art to Zebras, the Georgetown University Department of Art & Art History, the O’Neill Institute for National and Global Health Law, and Women of Color Advancing Peace, Security and Conflict Transformation (WCAPs)