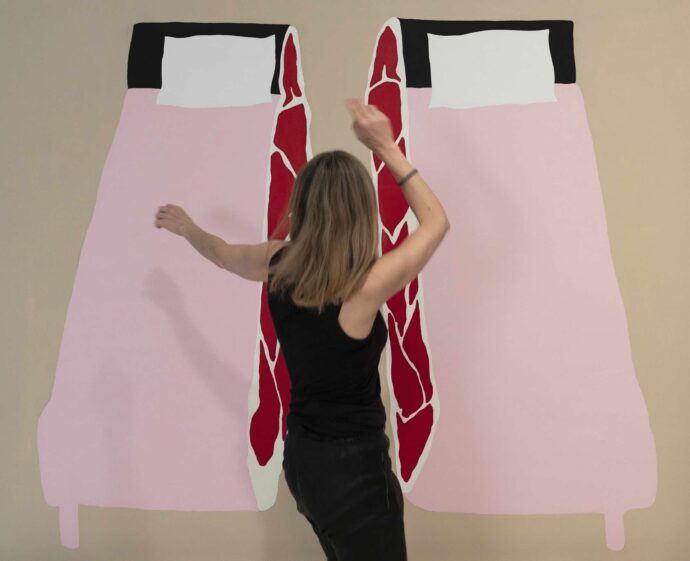 Awarded to a woman visual artist with outstanding talent, vision and perseverance with strong ties to one of the 5 the Nordic countries.

The Elfi Art Award program is chaired by her daughter, Curator, Art Consultant and Collector Anita Alvin Nilert. The first recipient was Norwegian- NY based Eva Faye. This year’s recipient is Swedish- NY based Mia Enell

Mia ENELL is an interdisciplinary artist working primarily in painting and drawing as well as photography, video, installation and sculpture. Although she makes use of different media, Enell approaches her work with the internal logic of a painter. She is best known for her paintings, watercolors and drawings depicting the eccentricities of her inner life, often with humor and a surrealist bent. Visions and Haiku-like phrases – inspired by dreams, her surrounding life or drawn from the unconscious, are part of the work: Enell likes to play with words, which features prominently in many of her works.

Born in Gothenburg, Sweden (1967) Enell spent her childhood between Sweden and Antwerp, Belgium. Her parents were both artists (painters). Enell is a graduate from Nyckelvik Art School in Stockholm (1987) and received her DSNAP (MFA equivalent) from ENSBA: the Art Academy “Beaux-Arts” in Paris (1992), where she lived for a decade. During her time in Paris, she immersed herself in the French art scene and exhibited extensively in France. In 1998, she settled in New York City, while continuing to exhibit internationally.